The booklets provide a photographic record of historic WW2 sites in Brisbane from 1942-1945 compared and contrasted to their uses today. US Services official photographers were active during WW2 in places where few others had security clearance to do so and were able to obtain a unique snapshot of the city. These images now lie 'doggo' in American archives, long forgotten about...

This series of booklets was prompted by fact that of the approximately 3000 images we've found at the US National Archives and Records Administration (NARA) so far, about 80% relate to Queensland, and most of those to Brisbane and it's environs!

I see this series as a way to bring this resource to the Australian public's awareness.

* Present stocks are dwindling, and we don’t intend any further RE-PRINTING. We are working to "pdf" them and make available electronically / digitally.

There are 24 titles in this series:

* Booklet #1 was a collaboration with Peter Dunn and released July 2005 to accord with the VP-60 commemoration.

These publications are an offshoot of my project to Bring Home The Images to Australia... 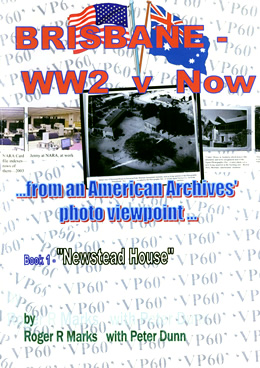 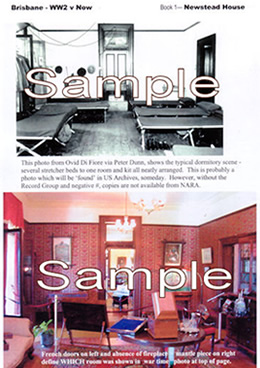 To order from this series of booklets, download and fill out our order form:

Complete the form and return to the postal or email address provided on the form. The PDF version of the form can be filled out electronically or manually, printed and posted to us by mail, while the DOC version can be filled out using MS Word, saved to file and emailed to us.

Payment methods include cheque or electronic fund transfer. Items will be mailed upon receipt.