YOU'RE interested in the World War Two (WW2) years IN AUSTRALIA. In particular, you've heard or read about some base or camp urgently built by (?) or for American forces in say, QUEENSLAND where most of their activity centred. HOW (WHERE?) do you find PHOTOS of it?

Being a US activity there's little chance that local (Australian) newspaper photographers would have gained admittance, perhaps not even Australian Department of Information (DOI) photographers were allowed access. So, try the internet at sites like State Library of Qld's Picture Australia, or my friend Peter Dunn's OZ at War site.

YOU'RE assessing the heritage aspect of an old building or residence and local legend says it was 'occupied (secretly ?) by the Americans'. You're scarce on detail about it during WW2. You try NAA's (National Archives of Australia) on-line database and may be lucky with some detail of its being occupied under the 'National Security (Emergency) Regulations' of the day. But, PHOTOS ? – not likely.

YOU'RE doing some 'PR' story for the 'local harbour board' and you'd like PHOTOS evidencing US troop or shipping movements, during WW2. You come away from your search less than fulfilled and somebody steers you to some museum here in Australia, the specialty of which is the 'World War Two occupation of Australia by the Americans'. You feel sure 'here will be some comprehensive key-word searchable database SHOWING you the huge wealth of somewhere between 10 and 20 thousand B&W still pictures taken by US Services' people HERE IN AUSTRALIA, DURING WW2'.

Well, dream on – it doesn't exist! The photos DO but they lie 'doggo' IN THE US Archives! They are NOT digitised and the US National Archives and Records Administration (NARA) has no such intention. Everything's card-file index driven and, effectively, you have to 'go there'. If for you, money is not the issue you can hire a 'local' US researcher. He may find some – you pay him AND the fees for re-pro quality prints from some NARA approved vendor. You review the photo(s) and wonder IF there may still be other shots, perhaps from another angle. WHEN I WIN LOTTO or manage to attract financial sponsorship for my personal project to “BRING HOME the(se) IMAGES” your dream may come true!

During my research for QAWW2, I became aware of this huge important photo resource. American friends kindly did some 'digging' and I was pleased with the few I obtained and featured in that work. I'd heard of the famed 'USAF pre-1954 photo collection' then on extended loan from NARA to the Smithsonian Institution's NASM. They were 'putting it on optical disc'. Such systems were then rapidly evolving, the pace of which literally overtook that organisation. Its result was unsatisfying to the point where today it's not easy to VIEW such out-dated product.

In my study of NARA's still pictures I'd become aware of around nine major holdings relevant to the Australian Mainland, WW2. The principal one I believe is RG111SC – 'SC' standing for the US Army's SIGNAL CORPS. It likely contains some 6500 relevant images, approx 1% of that entire holding. Because the US Air Force had its beginnings in the US Army's Air Corps it became obvious that 'AC' prefacing an aviation related photo meant Air Corps. When the NASM eventually did return the loaned material, NARA promptly redesignated it … RG342FH. Striving as I was to understand such rationale, I asked; if SC was Signal Corp and AC was Air Corps what was FH? NARA answered saying, “believe it or not, we were so pleased to get it back we called it FH; “Finally Here”!

My Project — Bring the Images Home

With 'Queensland Airfields' finally sold after seven years marketing, Jenny and I spent some savings on a trip to NARA, in and around Washington DC. The help desk guided us to imposing rows of card-file index drawers. There was the suggestion we should start with some 46 albums representing a SELECTION of AUSTRALIA relevant photos, generally neat 8” x 10” white bordered prints with a Signal Corps emblem in one corner and an 'SC #' in t'other. On rear face was a brief typed caption.

We were able to 'copy' chosen prints by various methods, depending on our specific needs. 'Flattening' the bulky album for normal photo-copying was not only disallowed but impossible short of temporary disassembly. NARA is very accommodating in that they allow researchers to 'rock in with laptop under one arm and flat-bed scanner under the other'. While such scanning is ideal from point of view of quality it is very time consuming.

Both conventional photo-copying and full scanning can only be done by calling up the 'duplicate print(s)'. During our 2001 visit the duplicates were stored in 'shoe boxes', tightly packed, several hundred to each box. It was indeed 'a pain' to search for individual (number) prints, remove for copying and return to correct order in the box! This system suffered from the inevitable inaccurate repositioning and physical dislodgement (often LOSS !) of the carbon-copy typed paper caption GLUED to rear face. On the other hand, duplicates generally still had their 'edge-marking' intact. I'll describe more fully later this edge-marking, such as I understand it. Suffice to say here that one element of such edge-marking is generally, 'Lat-Long' – i.e., WHERE the photo was taken. While it is sometimes wrong, it's usually better than nothing when the caption has been lost.

Clearly, time was always going to be our enemy. Early in our visits we settled on use of a hand-held digital camera for our copying of these images. The drawback is somewhat warped images with unwanted glints of light reflections. However, we really only need a representative image for such 'finding aid database' and we need always to honour NARA's established system of public procurement of re-pro quality images.

To summarise, our progress after three such visits aggregating around 130 hours is approx 3000 images collected with surviving caption detail and as much edge-marking as we could find. Typical edge-marking on relevant Australia photos, features … “GHQ (General Head Quarters) – SWPA (South West Pacific Area) – SC (Signal Corps) - 43 (1943, date of photo by year) – 5276 (some sort of sequential print number), followed by '27S – 153E', in this case, the latitude – longitude for Brisbane, Queensland, Australia. It may be that late in the WW2 period of hostilities, the Signal Corps decided to discard some earlier catalogueuing system based on this '5276' print numbering in favour of the (current) 'SC #'. When one carefully notes the '5276' detail, one frequently finds OTHER photos in the original sequence evidenced by say, 5277 and 5278 (and same date!) but with ascribed SC #s way out of order.

For want of a proper DATA Base program, Jenny has inserted this assemblage of 100 pixel wide image and caption etc into a simple MS Word table format. We want to believe what the 'gurus' tell us in that such info will be easily translated to an appropriate database program, 'when the time comes'.

The Australian War Memorial (AWM) is 'supportive' of this idea but National Archives of Australia (NAA) quickly shunted my enquiry re a possible 'Archive to Archive' program to LOCATE these and put them to a keyword searchable database (i.e. create an on-line finding aid!) to the 'too hard basket'. They suggested I approach the National Library of Australia (NLA) in respect of their program titled 'Picture Australia' (PA). As of around 2004, the only foreign country participating in 'Picture Australia' was New Zealand. It was suggested I should encourage NARA's cooperation! AWM and NLA indicate they'd 'add a link' to their websites once such a 'finding aid' was compiled but until then, I'm on my own.

My written approaches to the Australian Government have shown me they are not interested.

This matter should be viewed with some urgency because Archives periodically review holdings and discard downgraded bits. WW2 period Australia is truly a small 'bit' in NARA's ocean.

FROM THESE NARA RECORDS WE HAVE COMPILED a US and Australian NAME/PLACE INDEX. Perhaps YOU had a relative involved during WW2.

Similarly you may wish to search our list of US Services' photographers whose names appear in these captions.

We've made three privately funded trips to NARA (Washington DC, USA) on this pilgrimage, and we, Jenny and I have now published a series of photo-booklets: 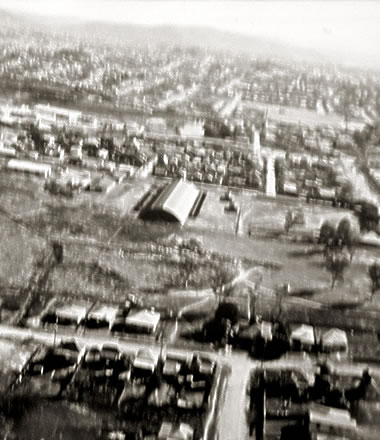