Apart from some work on the wooden cockpit floor panels for Ralph Cusack's ex RAAF D.A.P. Beaufort (twin engine WW2 torpedo bomber) and some interesting work on the inflatable rubber dingy hatch in the wing of Ross Stenhouse's Percival Proctor Mk 1, my most ambitious effort so far has been a contribution to Lang Kidby's AVRO Avian project. While this aircraft has now been sold to an American this little bit of it's history may still be of interest.

As Graham Potts spelled out in his photo article (1998) in the very respected magazine, Classic Wings Downunder, my contribution was ailerons and the combined (cockpit) seat and control rails.

As an engineer at heart, I've never been one to labour separately on several IDENTICAL pieces when they can be jigged and / or temporarily sandwiched together allowing a single machining. 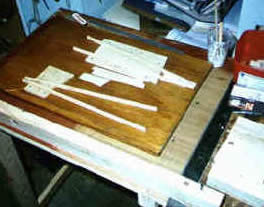 Each aileron has 7 riblets and while those for the starboard and port ailerons differed by some opposite - handing, they generally suited conventional jigging.

However, each aileron also has two more robust (heavy!) ribs and a similar inboard end rib. The heavy ribs are understandably associated with the mounting of the actuating arm, and I certainly didn't like the prospect of making these IDENTICAL heavy ribs nor even the two semi-heavy end ribs, SEPARATELY!

Each finished heavy rib comprised a top and bottom flange fixed to a web forming a typical 'I' section. Inevitably (?) there was tapering in both plan and elevation, from the aileron spar, (the fat end), towards the trailing edge. The designer, (bless his heart and soul !), included a full - fitting tapering web haunch on both sides of the web, at the far end.

My solution was to start by shaping all webs, each being band saw rough-cut from a sheet, itself a built-up lamination of three 1/16" aircraft (three!) ply sheets.  Compared to the use of 3/16"thick spruce, this resulted in a denser, more secure grounding for the later specified pinning and brass screw fixing through the 3/16" spruce flanges.

Partially shaped solid spruce haunch pieces were glued to each web face at the fat ends and then all four assemblies glued together, side by side.

The build up of this rack of ribs, (much like a rack of lamb!), followed, with temporarily clamping to a short length of solid dummy aileron spar.

The design has a thin rear spar thrown in for good measure! 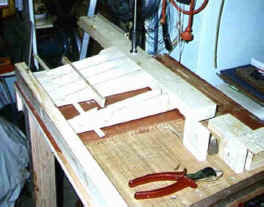 Sir Alliot Verdon Roe (his name giving rise to the aviation icon AVRO) must have encouraged his Pommy designers to set a wood-working exam in every item - or so it seemed to me! The aileron spars themselves were designed as an 8' 9" long (about 2.7m) hollow box section finished about 1 3/4"square. Over the out board 10" or so length, these thinned in elevation, via a compound curve! 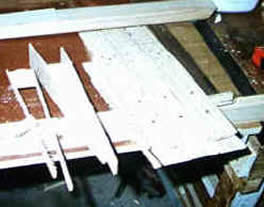 Yes, they were a pain, but suffice to say after building a temporary (?) hinged extension to my one only bench and carefully string-lining the reference shoulder etc., they turned out STRAIGHT and within tolerance.

In the AVRO designers' constant quest for light weight, the cockpit seat rails called for removal of solid spruce to leave the round-filleted web I section, typical of solid timber wing spars. While I can't claim originality in the following do it yourself (D I Y) approach, it proved interesting. In essence, the usual round metal base of a hand held electric router was temporarily exchanged for a square wooden one. 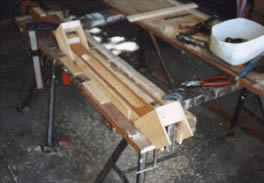 The entry and exit paths of the plunge routing operation were effected via the clamp-on guides.

I had visions of doing this for days on end if, as I sort of hoped, I was to be involved in the manufacture of the wings. However, when I met Robert Dunlop and was introduced to his master-craft fine furniture FACTORY / workshop, I could see why Lang commissioned Robert to make the wings! It was surely another of those offers Lang couldn't refuse. 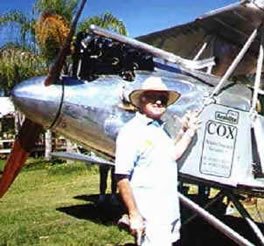 The endorsement above "Cox" was "Araldite" and my "fingers crossed" gesture is part of international sign language.

So now you'll understand me when I say that I was riding with Lang, in spirit, every inch of his way in UFZ. It was great to welcome him and the Avian home to Caboolture, on November 6, 1998. 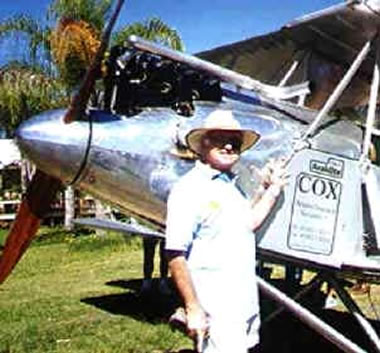