From "WW2 US Aircraft" by Bill Gunston, this is close to Cairns Aircraft Recovery Team's P-39F in North Queensland. This 'F' model, serial 41-7215, designed and manufactured by America's Bell Aircraft Corporation, is the one belly landed by Lt Walter Harvey, on Cape York on 1 May 1942* (see Crash Details). It is also an aircraft on which I had the singular pleasure of helping with wing rebuilding.

Walter Harvey died in 1998 having revisited Australia only once since WW2. That was in 1992 when he delighted the P-39's re-builders with his obvious pleasure in seeing their great work. They will remember him, not least for HIS ready realisation that perhaps (?) his only claim to fame may be that he ..."crashed that godamned airplane!" , but also, as he let slip, ..."I flew 131 combat missions and was awarded the Distinguished Flying Cross and two Air Medals."

Nick Watling, Ian Mullins, John White and Taffy Jones are the foursome who stuck to this task. It must be said that Ian Mullins' devotion to detail and tenacity of purpose has been outstanding. 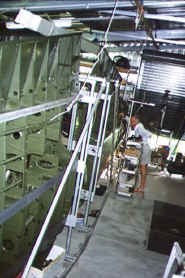 Ian's tall figure is testament to the aircraft's huge chord dimension, some 2.6 m at wing root. Here he is leaning over one of the wheeled trolleys he designed and built to allow ease of access to the entire height, importantly for operations such as riveting. Overhead is a glimpse of the travelling hoist Ian designed (and built!) to facilitate the safe lifting and single-handed maneuvering of 4 m long sheets of Alclad - wing 'skin'.

In fact, what shines through every facet of this 28+ year project is the ingenuity Ian applied not just to replicating the work of "Mr Bell and his many thousand work force of WW2" but to the very design and building of numerous tools. The P-39 features an external skin flush riveted throughout. These rivets require 'countersinking' and when holding thin metal STRESSED skin in place, this means deforming the inner edge of the hole - an operation called "dimpling". With many thousands of rivets in the aircraft Ian designed and built a DIMPLER! When positioned with adjacent height - adjustable rollers, (Ian built of course!) the operator has hands free to move large sheets over the mandrill while his foot works 'pads' electronically controlling the 12 volt powered device. Needless to say, parts of the Dimpler saw earlier service as components in car air-conditioners, windscreen wipers and the like - themselves rescued from the local dump! 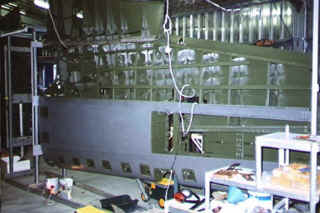 This is the under-side of the right wing, with the wheel well evident upper left and the 30 cal. machine gun ammunition tray housings open at lower right. Already the green 'olive drab' and blue-gray colours are a sort of proof of the aircraft's US military heritage.

This P-39 languished on Cape York from 1942 until 1971 when the team rescued it. Attention was concentrated on the fuselage right down to full dismantling of the engine etc,. That severe damage had been rendered to the nose section in the RAAF's pursuit of public safety from canon ammunition still on board, is well known. With the whole fuselage returned to near factory - fresh condition, that section went into storage at John White's cane farm in 1988.

The wings remained in storage until Ian had built his retirement 'shed' in Condon, Townsville. It was custom designed and built by Ian for this wing restoration phase. Not just does it house the wings, left and right, secure in their sturdy jig frames which ensure original spatial integrity and surety of joining to the fuselage (back in Mossman NQ!) but most workshop machine tools also enjoy their place. A spacious COVERED walkway connects the 'shed' to Ian's home.

Exfoliation of aircraft high strength alloys is a corrosive degradation the onset of which is almost inevitable with age. The spars in both wings of this P-39 suffered badly. Ian's solution was to MACHINE NEW SPAR CAPS, some about 4.5 m long, using his milling machine with a work table only 400 mm long! Yes, thicknesses were required to TAPER! Ian achieved this AND the inevitable cross-bed slopes all with micrometer adjustment of his 400 mm long work table!! Just think what a staggering end result would have been achieved IF the project team could have afforded the prohibitively expensive non-standard extrusion. As it is, Ian used specification grade alloy but in currently available shapes, stitched together with rivets. Overall, it would require one of 'Mr Bell's Inspectors to pick the difference!

By 1998, completion of wings then perhaps "only a year or two" away people were going to get to see this amazing rebuild. It seemed only a matter of WHERE, for HOW LONG and within what display environment. 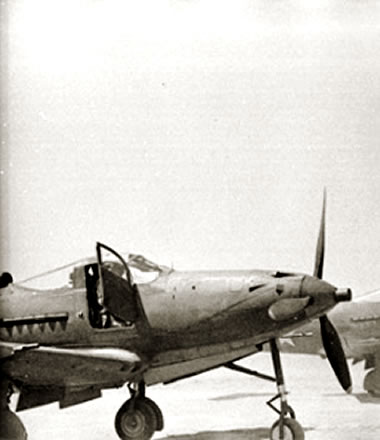